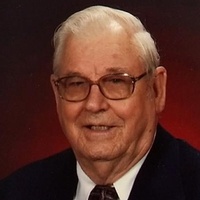 Mr. Kenneth Lamar Ferguson, age 91, beloved husband of 70 years to Mrs. Kathryn Putnam Ferguson, entered into eternal rest on Saturday, March 31st, 2018 at his home. He is survived by his son, Danny Ferguson (Deborah); grandchildren, Jennifer Oerman (Jason), Jonathan Ferguson (Erin), Katie Tate (Hal); and nine great grandchildren. He is preceded in death by his parents, Daniel Gary and Cora Lee Ferguson; brother, M.B. Ferguson; and sisters, Alice Farmer and Estelle Ferguson. He was a member of the Langley First Baptist Church where he previously served as the Chairman of the Deacons, the Sunday school director and teacher, and was a former member of the Burnettown Town Council. Mr. Ferguson was a member of the Albert Pike Masonic Lodge in Langley, SC and proudly served The United States of America in World War II in the Navy. Mr. Ferguson will be greatly missed by all of the lives that he touched in the 91 precious years he had on this earth. A funeral service celebrating his life will be conducted on Wednesday, April 4th, 2018 at 2 o’clock pm at Langley First Baptist Church with the Rev. Chris Masters officiating. The interment will immediately follow at Sunset Memorial Gardens. The family will receive friends one hour prior to the service at the church. The pallbearers include: Greg Cato, Clifford Rushton, Danny Ray Jenkins, Charles Lambert, Troy Nobles, Reggie Walden, and Jim Free. Memorials may be made to the Langley First Baptist Church in honor of Mr. Ferguson at 2841 Augusta Road. Langley SC, 29834. The family would like to give a special thanks to the caregivers with Daybreak Adult Care for their services. Napier Funeral Home, Inc. 315 Main St. Graniteville, SC 29829 has been entrusted with these arrangements. You may sign the guestbook at www.napierfuneralhomeinc.com