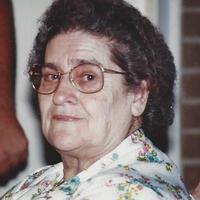 GREEN-Marie Baxley Green, age 93, of Aiken, S.C., beloved wife for 28 years to the late John Henry Green, was called to be with the Lord and peacefully passed away on Sunday, January 8, 2017 at her home. Marie’s love of family was well known to everyone she met. She “loved” and was a wonderful wife and a blessed mother to her children. She was a member of Warrenville Church of God. She spent her time reading her Bible, praying for her children and watching Christian Broadcast on TV. She truly loved the Lord and testified of His goodness every day. Marie was born in Camden, S.C., the daughter of the late Jack and Minnie Jane McClellan Baxley. She later moved to Augusta, Ga. where she met her husband, John Henry Green. They settled in Warrenville, S.C. and raised their family there. She was the proud mother of six children. She is survived by sons; Jimmie C. (Linda) Green and Glenn E. (Teresa) Green; daughters, Martha K. (Adrian) Wells and Janice L. Williams. She was the proud grandmother of sixteen grandchildren, thirty-four great grandchildren and twenty-three great-great grandchildren. She was preceded in death by a son, Marvin H. Green and a daughter, Margaret Jackson Withrow. Marie had a great love of sewing and crocheting. She later put her talents to work by supporting herself. She worked at Jackson Sportswear for six years, then eighteen years at Aiken Industries and six years cooking for the Shell Station Restaurant in North Augusta, S.C. A service, celebrating her life and home going, will be held at the Warrenville Church of God in Warrenville, S.C. on Wednesday, January 11, 2017 at 2:00 PM with Rev. Robert Skelton officiating. The interment will follow at Sunset Memorial Gardens in Graniteville, S.C. Her grandsons, John Jackson, Eddie Green, Christopher Green, Matthew Jackson, Alex Conaway and a special friend, Michael Taylor will serve as her Pallbearers. The family will receive friends at the funeral home this Tuesday evening, January 10th from 5:00 until 7:00 PM. Napier Funeral Home, Inc., 315 Main St., Graniteville, S.C. 29829, is in charge of the funeral arrangements. You can visit the online guest register by logging on to www.napierfuneralhomeinc.com.

To order memorial trees or send flowers to the family in memory of Marie Baxley Green, please visit our flower store.