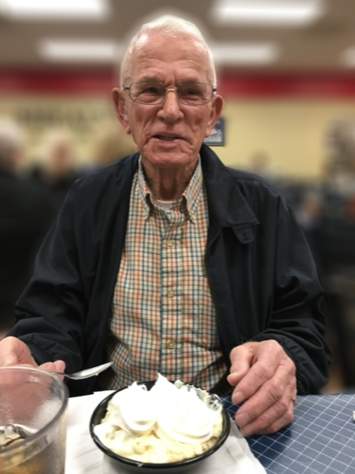 Mr. William A. “Jim” Lancaster, age 89, of Warrenville, SC, was entered into eternal rest on Monday, August 3, 2020, at Aiken Regional Medical Center. He was preceded in death by his wife of 59 years, Peggy Lancaster.

He was born in Buffalo, SC, in Union County, on April 1, 1931, to the late Robert and Willie Mae Lancaster.  After high school graduation, he served in the Army during the Korean War. He enjoyed sharing military stories with anyone who would listen, especially the doctors and nurses who treated him over the past six months.  After his military service, he moved to Aiken County where he worked at the Savannah River Site for 40 years.  While employed at the Savannah River Site, he was given the nickname “Bert” which was displayed on his security badge.

After his retirement, one of his favorite things to do was to eat lunch at Shealy’s Bar-B-Que in Batesburg, SC. For dessert, he would always fix a big bowl of banana pudding topped with vanilla ice cream. For many years, Jim was an avid fisherman and hunter.  Some of his fishing buddies preceded him in death.

Jim loved his family dearly and would do anything in the world for them.  He will be greatly missed by his loving family and friends.

The family thanks the Professional Case Management nurses and certified nursing assistants who provided care for him in his home during the past few months.

Due to the Covid 19 pandemic, a funeral service will not be held.

To order memorial trees or send flowers to the family in memory of William Lancaster, please visit our flower store.